Why Solar Now? It’s a Guaranteed Investment! That’s a bold statement in which we would not support if it wasn’t for one fact, it’s true in 2020.

Home solar has reached the most important plateau for a period of accelerated growth in 2020. The reasons are plentiful but the biggest one is you would have to seriously overpay and or finance too long in order to lose money.

With the efficiency improvements of home solar equipment, a homeowner gets more production out of less square footage. That’s so important because the cost of the panels is still about the same but the performance is much improved. This means the power the panels produce is cheaper.

The single thing that has made solar more affordable is competition, there are a great deal more companies in 2020. Expect the solar industry to be one of the fastest-growing industries going forward because it’s now a sound investment.

Solar Is An Investment

Solar is now a very sound investment so long as you avoid the pitfalls which are primarily the cost and long term financing. It’s pretty simple math but I will show you the real value of power over a 25 year period including price increases. Although this example is based on $150 a month for actual power the example is scalable. The bottom line is you can buy a solar system today for as little as $17,000 that will produce $49,000 in power over a 25 year period. That’s a cool profit of $32,000 over that period.

A lot of people think that’s not very much savings over 25 years but you will be out every dime of that money sticking with the power company. In essence it’s a free investment provided you avoid the pitfalls.

Most of the information about solar on the internet comes from the companies themselves which can be wildly exaggerated. Far too many make ridiculous claims of savings. It’s much  better to do the math and be prepared.

When calculating the value of your solar production over a twenty five year period use the your present day average monthly bill and multiply x 12 Months x 25 Years and add 10% more and that’s a realistic price increase over twenty five years. The reasoning is in over the next twenty five years how we obtain our energy is going to diversify. So fossil fuels will probably go down in cost quite dramatically or at minimum hold steady and that’s what dictates power price increases. I’m sure power companies will figure out a way to justify a higher price but it doesn’t mean they’ll be effective at doing so.

A Realistic View of The Potential Savings

So the truth is if your average power bill of a $150 a month will average about $165 a month over the next  25 years (300 Months). So we know the accumulative value of your power cost $49,500, that’s what you pay the power company in twenty five years. Now we have the value of the power lets compare that to the cost of a solar system that produces that power.

Knowing the cost of the power will show what the real value of home solar and if it’s for you.

We now know you have $49,500 to invest in solar with no cost to you because you will pay the $49,500 to the power company without solar based on a $150 per month power bill. You do not want to spend that much because there wouldn’t be any benefit from having solar and you don’t need to.

Here's A real Example of a Sales Presentation From A Solar Company. It Claims $66,000 in savings for a system slightly larger than the above example Which Is Impossible! 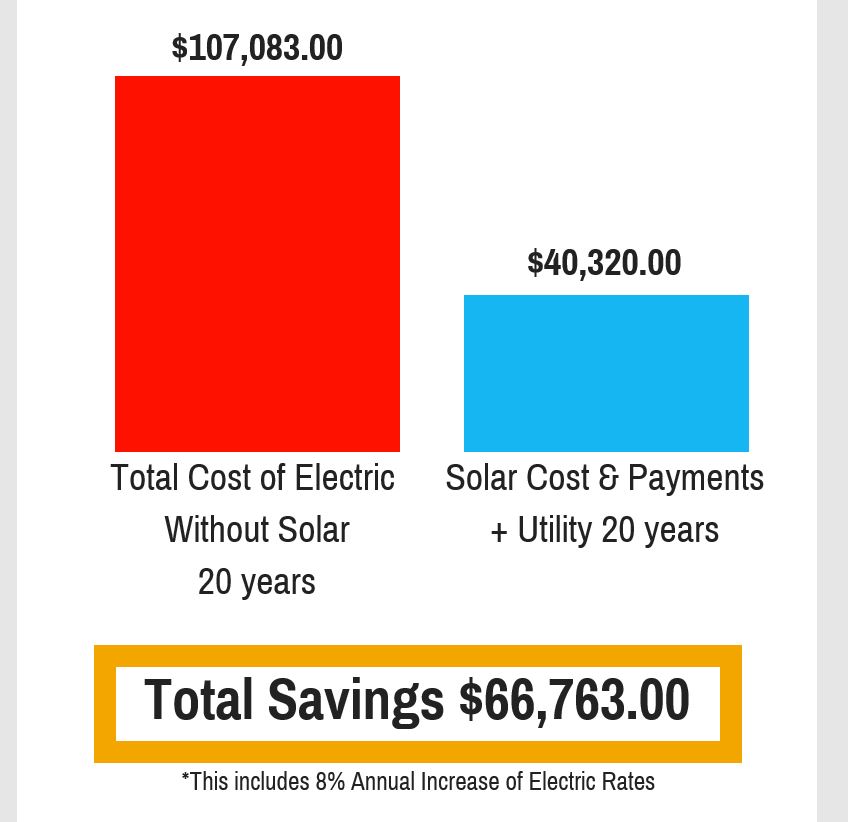 Try to imagine being sent this information to present to a homeowner, it shoots the sales reps credibility out the window. These are the kind of pitfalls you want to avoid, misinformation.

You Don't Need To Be A Solar Expert - Just Common Sense

Be aware of the any solar companies primary objective and that’s to make as much profit as possible. So here’s the most important things to know before purchasing home solar. Why Solar Now? It’s a Guaranteed Investment and no expertise required.

The reason why solar companies are structured this way is that the solar company doesn’t pay those additional costs, the buyer does.

The solar company doesn’t lay out any of the costs until the finance company funds their account. This is the reason companies can’t break-away from the above business model.

As you can see there are quite a few overhead costs that you can avoid. Start with $2,500 in closing points, the cost of marketing, and the cost of sales reps all can be avoided. I know if I was going to deal with any retail solar company I would contact the owner directly and cut out as much of these costs as possible.

Banks don’t do home solar loans because it’s an unsecured loan. In comes home solar specialty financing and a low interest 5% loan over twenty years doubles the cost of your solar system. In addition there’s the $2,500 in closing points that although are hidden from the customer, the customer pays for it.

The best way to go solar is to pay it off ASAP. When you get a proposal from any company tell them you are paying cash to avoid these additional charges and save some money. Even if your financing for a shorter term and paying it off quickly it’s still the same as cash to the company.

Although solar buyers for the most part have excellent credit you want to avoid credit pulls because it will ding your credit score. Knowing up front you want to avoid those closing points there is no point in letting them run your credit. Why Solar Now? It’s a Guaranteed Investment is true but home solar can be even a better investment if you avoid overpaying.

Hard Times Can Strike Anybody At Any Time

No solar company is going to tell you what I’m about to tell you because it would violate there finance company policies. When you don’t pay your power bill your power gets turned off but not so with financed solar. Solar companies have no right to access your property to repossess solar panels nor do they want to.

Reality is should hard times hit and they do hit you are not under the pressure of having your power turned off. Yes it could do damage to your credit but you can right that ship at a latter date but have power in the meantime.

The only home solar loans that I’m aware of that can lien your property are government-funded PACE loans which I recommend avoiding. The problem with PACE loans is a lot of people that qualify don’t have the income to pay it off quickly. They end up overpaying for their system because of the long term interest. Why Solar Now It’s a Guaranteed Investment!

Additional Savings When You Prepare Ahead for Solar

Being prepared for home solar improves return on investment dramatically. The reason is the more efficient a home is the smaller solar system required.

The single biggest reason people inquire about home solar is because their power bill is high. Home solar doesn’t reduce the consumption of power but the following chart suggests some things that do.

The Better The Plan The More Savings

Any homeowner should execute an energy plan in order to achieve maximum profitability from home solar. At this point in 2020 it’s hard to imagine somebody actually losing money from home solar. Home solar is opportunity knocking because there really isn’t any downside if you buy right.

Awareness is the key and that’s the intent of Florida Solar Report. We provide readers with information to protect themselves from making a bad investment and have a profitable solar experience! Why Solar Now It’s a Guaranteed Investment.

These days the solar tax credit seems to be all they talk about on solar company blogs. The reason is simple and it’s because it’s a huge savings! No question about it it just makes going solar a no brainier.

The key here is to consult your tax prepare and be sure you qualify for it. It’s based on folks who pay actual income tax equal to or more than the actual tax credit. Read more here Federal Solar Tax Credit 2020: Step By Step Guide.

The Number One Myth About Solar?

It’s time to dispel the myth that solar is expensive because relatively speaking it’s a bargain. Just look at the above example of how much money you are going to pay the power company over the next 25 years, $49,500 (Based On a $150 power bill with increases included). Go buy a car for $40,000 and what’s it worth in 25 years? Oh yeah the power company didn’t offset the cost of the car, that’s gone money.

Relative to a $40,000 car a $20,000 solar system is a bargain. You are spending that $49,500 even without solar because you will pay your power bill. Now you know why our answer to the question “Why Solar Now It’s a Guaranteed Investment! 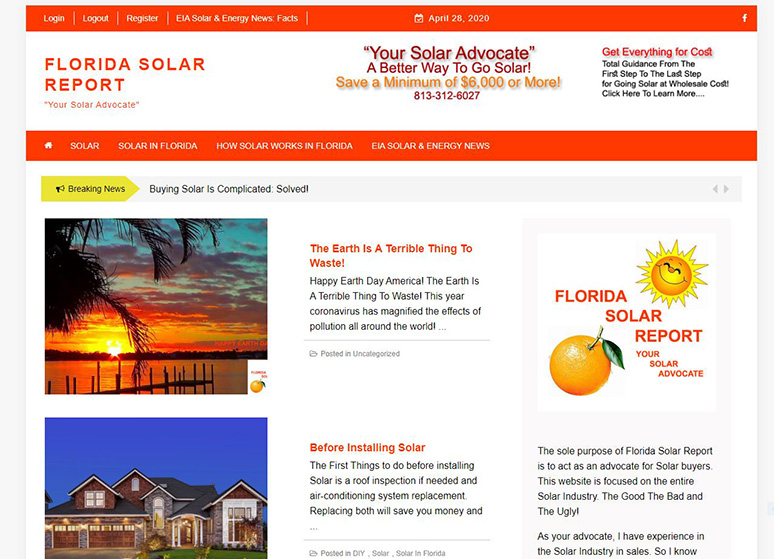 Solar is no joke, just ask the big oil companies if you don’t believe me. The time has come, and that time is where the cost of clean energy is cheaper than dirty energy. Renewable energy can compete with fossil…

Why Is solar better for a new house is because everything is in sync. The roof will age simultaneously with the solar system. The appliances and A/C & Heat are more efficient, conserving power consumption. A more efficient home uses…

Why Solar Now? It’s a Guaranteed Investment! That’s a bold statement in which we would not support if it wasn’t for one fact, it’s true in 2020. Home solar has reached the most important plateau for a period of accelerated…

Is Solar Sales a Good Job: No, unless you like being free help. I know this isn’t what many people want to hear but it’s the truth. Solar sales is like car sales, except it’s probably worse. Lets start out…

US Solar Report: A Consumer Focused Publication because it’s exactly what the home solar industry needs, the unvarnished truth! The focus of this site is on the consumer, unlike the solar companies. Most of the information available about solar is…

Why Solar Now? It's a Guaranteed Investment!